GOA was founded in 1976 by the late Sen. H.L. (Bill) Richardson. The GOA Board of Directors brings over 100 years of combined knowledge and experience on guns, legislation, and politics. GOA’s Board is not satisfied with the “status quo.” Americans have lost some of our precious gun rights and we want them back! This is why GOA is considered the “no compromise” gun lobby.

From state legislatures and city councils to the United States Congress and the White House, GOA represents the views of more than two million gun owners whenever their rights are threatened.

Jo Staats is Tennessee Director for Gun Owners of America, working for and with GOA members in the Volunteer state to ensure Second Amendment rights are preserved and honored as our Founding Fathers intended. 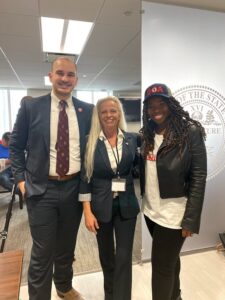 Jo has been working in the legislative arena since 1988 and focusing on 2A issues for over a decade. Serving as a Director for two grassroots organizations in West Virginia, and lobbying for both a state and national organization through 2016, Jo witnessed firsthand how endangered the Second Amendment had become.

A native of West Virginia, Jo and her family decided to buy a farm in East Tennessee where her family’s roots run deep. In 2019 they moved to Greeneville and began building a ranch. Today her family raises bison and enjoys the outdoors. Her intention was to ranch and leave politics behind. But after learning of the restrictive state laws impeding the Second Amendment, she couldn’t remain on the ranch and not be involved in the effort to improve freedoms for all Tennesseans. She joined GOA as the State Director in November of 2021 after volunteering in 2020 spearheading the first annual Second Amendment Lobby Day.